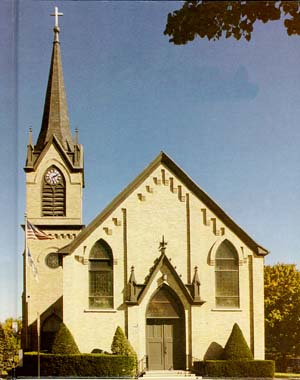 St. Stephen Lutheran Church has prospered in the community of Horicon, Wisconsin, since its beginning in 1858. There have been substantial changes in its buildings and its people over those years, but the Grace and Love of God has remained constant.

The history of St. Stephen Lutheran Church should bring to our memory that martydom of St. Stephen as he looked “into Heaven and saw Jesus”; that Horicon is an Indian name meaning “pure water” and that Jesus said, “he that drinks of the water (pure, living water) which I give him shall never thirst”.

In 1858 there still were many Indians in and about the Horicon area. The road on which the church (and parsonage) are located was formerly a military road known as the Sauk Road or Decorah Trail. Built by the government during the Black Hawk War, it connected Port Washington to Fort Winnebago, now Portage.

In 1858, Gottlieb Fachtmann, born in Hanover, Germany, a man who had served as Pastor in Brandenburg, Prussia, was acting for the Wisconsin Synod in making an exploratory journey through Horicon, Beaver Dam and Columbus. He gathered together for Horicon worship services the Charter members: Julius Hoernlein, Sr.; David Schmidt, Charles Denninger, Albert Wokash, Karl Hanf, Henry Fischer, and August Luebke families.

The first four monthly services were conducted by Pastor Fachtmann, Granville, WI, in the Steiden house that stood opposite the Horicon Bank, the site of the present City Hall. This house was later moved to the NW corner of Finch and Maple, and was destroyed in the 1980’s due to a natural gas explosion.

Rev. John Henry Jacob Elija Sauer from Slinger was the next Pastor to hold monthly services. Under the leadership of the Rev. Schmidt of Woodland monthly services were to continue and next by Rev. Kolb who served three years. In 1861 the home of Mr. and Mrs. Julius Hoernlein, Sr., 115 S. Hubbard, was first used for worship. Pastor Edmund Multanowski, also of Woodland, began his services in 1864 and ushered in the new era of growth.

Growth in 1864 necessitated that the members build the frame structure which was built where the transept of the present church stands and which served both as church and school till 1872. It was used solely as a school till 1892 and was later moved to 610 Mill St. and renovated into a home.

In 1872 the congregation became independent and called Christian Berner, its 1st full-time Pastor. It affiliated with the Missouri Synod and with Immanuel, N. Burnett and St. John, Brown’s Corners. The group outgrew its quarters by 1872, so with 35 families it dedicated a new brick church which forms the present west half of our building. It cost $6,000.

The first parsonage, 109 S. Cedar, was purchased in 1878 and later became the teacherage. It was later sold. In 1888 the last parsonage was purchased. Pastor Berner had built this home and sold it to a Mr Marquardt. It first had only the west portion. The east portion was added in the 1890’s, the sun porch around 1929, the office and picture windows in 1957 and vinyl siding in 1981. It was sold in 1993.

By 1904 the congregation had again outgrown her quarters and it was decided to build an addition to the church. This was completed in the fall of 1905. This gave the church a cruciform shape, 110′ x 57′ z 31′, seating 600-700. The addition of the present chancel and transept was built by C. Feuerhammer. A Mr. Dietz installed two furnaces. The next year arrangements were made for an undercroft for organizational meetings.

In 1926 it was resolved to redecorate and install a new vapor-steam heating plant by Wilke & Co. Mr. Wuertz, Milwaukee, redecorated for $6,000. New carpeting was purchased by the Frauenverein, completing all redecorating by the 70th anniversary celebration in 1928.

Closely related to music are the 3 tower bells acquired in 1886 from a St. Louis firm for $502. They weighed 2,100 pounds. One bell was repaired in 1923 and replaced in 1928. They are rung symbolically for a call to worship, prayer, confirmation and at the time of funerals. In the past they have been rung on Saturday evening to herald Sunday worship. The clock was installed in 1912 and still has its unusual hands of wood. The clock tolls the hour and half-hour on the large bell. A chimes keyboard was added to the organ and a carillon with forty tapes of some 400 hymns was installed in 1982, and has been updated to Compact Disc.

Over the years the church was renovated many times including the closing of the windows on either side of the altar in 1948, installing acoustical ceiling tile, chandeliers, ceiling beams and the speaker system. In 1964 new carpet and balcony pews were installed. a new roof was installed in the 1970’s , plus sandblasting the exterior and sealing the tuck pointed bricks. Anticipating the 125th anniversary in 1983, the church was renovated in 1979. The ceiling was dry walled, an attic exhaust fan was installed, wiring was updated, the interior repainted and redecorated with the gold leaf accent. New carpeting and communion rail were installed to complete the renovation.

Pew cushions were installed in 1989, a new boiler in 1990, new doors in 1991 and new carpeting again in 1996, and the handicap ramps in 1997. The building has been well maintained and cared for throughout the years, but we the people are the “Church”. We have grown from a modest handful 140 years ago to the largest congregation in our area with 1163 communicant members and 1421 baptized souls. The future of our church looks bright and prosperous, and the Lord will continue to direct our actions as to where we go from here. One thing is certain, we will remain in the Word and in His Word alone.

The following pastors have served this congregation.

This relatively short list of pastors over the century-plus history of this church has much to say about the people of St. Stephen and the men the Lord has chosen to serve on the various Boards of the congregation throughout its history, assuring not only the maintenance and building of its facilities, but assuring an uninterrupted flow of the Word of God from its pulpit and its school.

The Lord’s blessings cannot begin to be measured as 164 plus years of service in the Kingdom of Christ lie behind us. The real joy is the assurance of God’s Word that those blessings will continue in the future as we remain faithful to Him and to His Word.

Ground work has been laid to take this congregation into the 22nd century. It goes without saying that the world of today is far different from the one our forefathers found in Horicon. We are no longer a gathering of German immigrants that naturally seek out a German Lutheran Church. Horicon has become a diversified industrial/agricultural community.

Our congregation has adapted to the changing environment without sacrificing any of the Doctrines and Bible-based traditions that have been handed down to us.  The combining of church and school offices has helped the communication and continuity of our ministries; and the new meeting rooms have given us a comfortable, beautiful, and handicapped accessible place to gather for meetings and many Bible classes.

The 22nd century is just around the corner, and St. Stephen Lutheran Church is ready for the challenges and opportunities it will bring.

A member church of the Lutheran Church – Missouri Synod